Study says Buffalo Bills are the best-looking team in the NFL, Chiefs last

Share All sharing options for: Study says Buffalo Bills are the best-looking team in the NFL, Chiefs last 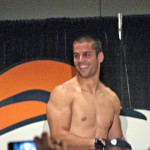 Denver's Eric Decker was not part of the survey

There is a fun, but utterly meaningless piece in today's Wall Street Journal that attempts to rate the attractiveness of all 32 NFL teams. The no-duh revelation is that NFL players are overall better looking than the general population. And it found the Buffalo Bills the best looking team, with the Kansas City the least good looking.

At the Journal's request, researchers at Ursinus College in Pennsylvania analyzed the facial structure of a sampling of 320 NFL starters (five offensive and five defensive players from each team). They also threw in two of the most photographed personalities on any team, the owner and the head coach.

To measure each subject's attractiveness, the researchers analyzed their photograph with a computer program that measures facial symmetry, or how closely the two halves of a person's face match up. Research suggests this is a reliable measure of how attractive a person is perceived to be. It also suggests that looks are a fair predictor of a person's career success. A 1994 study found that more-attractive "symmetrical" people are paid about 5% more than the average person while more homely "asymmetrical" people earn up to 10% less.

Using the methodology, the study found that kickers, not quarterbacks, are the most attractive. I've felt that for years. The biggest flaw in the study is that it looked only at 10 players from each team, and only the big names or starters (the list of players from every team is behind a pay wall, so can't link). For example, the list of Denver Broncos did not include either Brady Quinn or Eric Decker. The latter was voted by Outsports' readers as the world's hottest athlete.

The funniest part of the story came with the revelation that some owners and coaches rated as more attractive than their players:

Facial symmetry does not change with age, which is why 59-year-old Buffalo Bills head coach Chan Gailey is more attractive than many players. "My wife will be shocked," said Mr. Gailey, through a team spokesman.

Who do you think are the NFL's hottest players and teams?