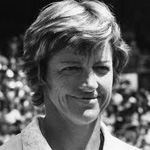 Australian gay activist Kerryn Phelps wants anti-gay tennis legend Margaret Court's (right) name erased from the Australian Open court that has hosted so many matches. She Tweeted earlier today: "How about changing the name of the Aust Open venue?"

Tennis Australia released a statement today distancing itself from Court's political and religious views while embracing her as a tennis champion:

Margaret Court has won more grand slam titles than any other player and has been honoured for her achievements in tennis and she is a legend of the sport. We respect her playing record, it is second to none.

This is a fundamental right and principle, including within the world of sport. Anyone advocating otherwise is advocating against fundamental and essential rights.”

TA does not support any view that contravenes these basic human rights.

That seems like the perfect answer to me. When it comes to recognizing someone's athletic accomplishments, I don't think politics should play into it. Certainly Court's positions on gay people and gay rights are terribly disturbing to me. But if the "gay agenda" starts erasing people from history because they disagree with us? That would be very damaging to us in the short term and the long term; It's something we'd all regret years down the road.