Share All sharing options for: CBS airs Focus on the Family ad during Tim Tebow game 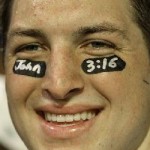 I was sitting down to watch the Patriots-Broncos AFC playoff game, and I was not expecting an ad from the anti-gay group Focus on the Family. The ad featured a bunch of a adorable kids quoting the Biblical verse John 3:16, closing with "life ... wow."

Focus is not a religious organization but rather a political advocacy group that fights aggressively against gay rights. The group lobbies vigorously against laws protecting gays and pushes the idea that being gay is a choice; it features "ex-gays" who tell how they became straight. In 2006, the American Psychological Assn. said that the positions pushed by Focus "create an environment in which prejudice and discrimination can flourish."

This is the Tim Tebow effect. Tebow has been a spokesman for Focus and with Tebow's Broncos playing in prime time, the commercial was guaranteed to get a lot of viewers. When people wonder why Outsports has been so critical of Tebow -- closet case or not -- this is why. He actively supports a group that would deny gays and lesbians equal rights and has caused untold misery for those wrestling with their sexual orientation. So don't tell me we need to give Tebow a break, not when he has aligned himself with a group that would deny my very existence.