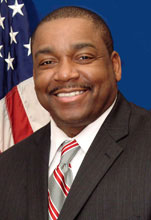 There is so much wrong with what New Jersey Assemblyman and Jersey City cop Charles Mainor tweeted while watching the Giants-Packers game Sunday night:

"We are not going to just lay down, we come to play," the message read. "Who the hell do you think we are the DALLAS COWGIRLS OR THOSE GAYBIRDS FROM PHILLY...NO WE ARE THE NEW YORK GIANTS.”

The most offensive part has to be the fact that he referred to the New York Giants as "we." I don't remember seeing Mainor out there in freezing cold making any tackles. I don't remember seeing Mainor catch any touchdowns. No, Mainor was in a nice, warm party sipping who-knows-what and stuffing his face with pigs in a blanket. "They" are the New York Giants, Mr. Mainor.

Second is what's gotten Mainor into so much trouble: Calling the Philadelphia Eagles "Gaybirds." It doesn't help that he calls their other NFC East rival the Dallas "Cowgirls," but that term is thrown around so much it's lost most of its impact. Of course, the implication is that gay people don't "come to play" and don't make big plays and hard hits. Gays are fairies, flitting about the shopping mall. Maybe Mainor would like to learn a lesson about that from Esera Tuaolo.

The third troubling piece is the requisite non-apology:

Here's where things get interesting: According to Mainor, he authored only part of the post. He claims a "friend" sat at the computer and punched in the "gaybirds from Philly" line before it went public.

"I have to take full responsibility because it was under my name," Mainor told The Star-Ledger on Monday. "I have no excuse, other than me not looking before he did send the post."

Are you kidding? Who types part of a Tweet (but doesn't submit it), then walks into the other room while someone else sneaks up on the computer, adds a homophobic comment, and submits the Tweet? The excuse is even worse than Anthony Weiner's!