Share All sharing options for: German soccer head at odds with key player over whether gays should come out 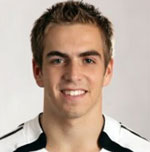 The departing head of German soccer is at odds with one star player over whether gay players should come out openly.

Theo Zwanziger told gay players to "have the courage to declare themselves." He spoke at a discussion panel on homophobia in soccer sponsored by the German soccer federation of which he is president.

"It would be not only a breakthrough for soccer but for the entire society," he said in an interview with a Frankfurt newspaper.

But Philipp Lahm, the German team captain, reiterated what he said last year about the sport not being ready for an openly gay player.

Soccer "is like being the gladiators in the old times," Lahm said in an interview published in the same Frankfurt newspaper. "The politicians can come out these days, for sure, but they don't have to play in front of 60,000 people every week.

"I don't think that the society is that far ahead that it can accept homosexual players as something normal as in other areas."

Lahm denied in his autobiography last year that he is gay, so what he said this week is not new. I think society is much farther ahead than people like him, and that includes the president of his soccer federation. It also includes German sports bloggers who have teamed up to collectively fight against homophobia in sports. Maybe they'll help drag ignorant people like Lahm into the 21st century.