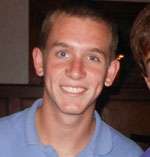 Phillip Parker, 14, of Gordonsville, Tenn., killed himself this month, a victim of constant bullying at school, his parents said. "He kept telling me he had a rock on his chest," said Ruby Harris, Phillip's grandmother. "He just wanted to take the rock off where he could breathe." His death stunned his family (750 people attended his funeral) and should outrage us all. It angered Robert Scott, an openly gay high school soccer player in Memphis, who is part of the teen blog BradRobertBen we have written about before.

While [Philip] has passed and will be remembered as another of the wrongly killed students of our time, he has sparked something in me and others alike. We want to lift that rock from his chest – let him breathe freely without others freely bullying students like him.

Robert, 18, linked Philip's death to a climate of anti-gay hatred in Tennessee, whose legislature might act again on what is called the "Don't Say Gay" bill. The bill would make it illegal to discuss homosexuality in the classroom before ninth grade. The bill stalled last year but is poised to be reintroduced in the legislature this session. As Robert wrote:

If this is passed then the teaching/discussion of anything other than heterosexual issues in grades K-8 would be unlawful. This is a major setback to anyone determining their own sexuality. It might as well be saying that anyone in grades K-8 who thinks that they may be gay or bisexual should hide it from everyone.

If you think this is wrong, please speak out – at the very least for Phillip.

I am amazed at how far Robert has come in the year since I first met him. He was closeted, out to only a few people, before starting the blog with Ben Newcomer and Brad Usselman. He soon came out to his parents and friends and posted photos of himself on Facebook with his then-boyfriend. He will attend Augustana College this fall and will play soccer.

Through the blog, Robert and Ben (Brad is not an active athlete thus year and not writing there) have helped many other high school athletes wrestling with their sexuality. I have connected several with Robert, knowing they wanted to share with a peer. He has a great head on his shoulders and can relate to what they're going through. I loved how Robert handled a classmate last fall who was part of a group asking whether he is gay:

Now being the kind of person I am, I enjoy confrontation – however, when I walked over to sharpen my pencil – one of the guys backed away from me like I had some sort of disease. I didn’t like this very much so I asked what his problem was, and he replied with the word ‘fag’ and other expletives. So I smiled at him, walked back to my seat, grabbed my bag, and headed to my English class to recite a memorization. ... I left him with no comment but a smile to piss him off even more.

My point here is, even though you can’t always ‘win’ with words, By simply smiling you can make them feel like what they’re doing is truly not affecting you. Would I have loved to punched him in the face and degrade his lack of intelligence? Sure, who wouldn’t; however, it’s better to be mature and walk away because in the end, ... I won’t see him but walking in the hallways for the rest of my high school career.

One blog won't end teen suicides or change the world, but it and others like it have made a difference to some teens who feel a little less lonely and know there are others like them. That counts for something.