History: The first Jewish bullfighter in the world was also gay

Share All sharing options for: History: The first Jewish bullfighter in the world was also gay 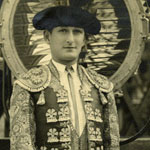 An exhibit has opened in Israel highlighting Jewish athletes who competed prior to the state's founding in 1948 and one of the most interesting deals with Sidney Franklin, who became the first American and first Jewish bullfighter in the world in 1923.

"It is no coincidence that very little has been heard up to now about the amazing story of the Jewish bullfighter who captured the Spanish people's heart," says the exhibition's curator, sports journalist Adi Rubinstein. "He just did not fit in with the commonly accepted image of the weak, puny Jew from the ghetto who always gets beaten up by the gentiles."

The exhibit in Tel Aviv is designed to show that Jews in that era weren't all weak. Franklin was such an accomplished bullfighter that Ernest Hemingway praised his skill. He was also gay, but was not public about it, according to Rubinstein.

"He was an iconoclast who chose to lead a life that was far removed from what his Orthodox-Jewish parents wanted for him. He captured the entire world as well as the hearts of both women and men."

Bart Paul, the author of a biography on Franklin, told this to the L.A. Times in 2010:

I think he was never outwardly gay, as we would think of being out today. As Barnaby Conrad said, if they had known, it would have killed him as a bullfighter in Spain. Not that there weren't bullfighters who were gay. It was just a culture of machismo.

I love history and hearing these kinds of stories, which show us that gays in sports have been around a lot longer than many of us might think.