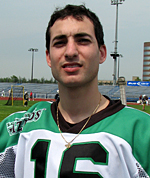 When we put together our list of the 100 most important moments in LGBT sports history, we knew we’d probably overlook something. Maybe an Austrian hurdler came out in the Eighties, or some Slovakian soccer player had said something horribly homophobic and damaging. And we may have missed something like that. But I was incredibly embarrassed when I realized we missed a story that we had written about extensively, and that I personally feel is a deeply important moment in our history.

Many people, gay and straight, wonder when we will have the first openly gay professional team-sport athlete in America. The truth is, we’ve already had him.

When we put together our list of the 100 most important moments in LGBT sports history, we knew we’d probably overlook something. Maybe an Austrian hurdler came out in the Eighties, or some Slovakian soccer player had said something horribly homophobic and damaging. And we may have missed something like that. But I was incredibly embarrassed when I realized we missed a story that we had written about extensively, and that I personally feel is a deeply important moment in our history.

Many people, gay and straight, wonder when we will have the first openly gay professional team-sport athlete in America. The truth is, we’ve already had him.

Andrew Goldstein was openly gay when the Boston Cannons drafted him in the 2005 Major League Lacrosse draft. While many athletes claim an out athlete will lose his position on the team if he comes out, Goldstein was selected by a team that knew perfectly well he was gay. Outsports had run a piece by Goldstein in late 2004 about his experience coming out to his college team. From that, ESPN aired a packaged piece on Goldstein, a startling goal he scored during a playoff game (Goldstein was a goalie), and his Dartmouth College team’s reaction to him being gay. With that, the Cannons still drafted him.

“Not a single person ever mentioned my sexuality to me,” Goldstein remembered. “It was only about lacrosse.”

A year later, Goldstein left the Cannons to play for the Long Island Lizards. I attended one of his games and was, in 2006, surprised at what a non-issue his sexual orientation was. Whether the fans I spoke with knew before I told them or not, none of them cared. It didn’t matter to the team, either.

"It isn't an issue with us," said team spokesperson Scott Neiss. "We're a professional lacrosse team who drafted Andrew for his skills in the cage. His teammates are all professional about it, and he is treated like any other player by us."

Goldstein said in his two years of playing Major League Lacrosse, he never heard a single opponent call him “faggot” or utter the word in any way.

“I can’t say my experience in this small, fringe sport is equivalent to what would happen in one of these big leagues,” Goldstein said. “All I can say is it wasn’t an issue and there was no reason for it to be an issue other than the issue itself.”

He left professional lacrosse in 2006 for practical matters: He was headed to UCLA to pursue a Ph.D. in molecular biology, which he received last year. He is now running a UCLA lab studying prostate cancer. Greg Garber, who produced the original piece for ESPN in 2005, told me recently, “Andrew’s going to cure cancer.”

With his professional sports-playing days behind him, Goldstein has turned to amateur gay athletics. It’s not easy finding a lacrosse game in Los Angeles, so he’s returned to ice hockey. He played with the Los Angeles Blades for several years; He won a gold medal in ice hockey playing with a Toronto-based team at the 2010 Gay Games.

Goldstein has also found a home with the GForce hockey team. The team was started years ago by Glenn Witman as a challenge to a straight local all-star team during Aspen Gay Ski Week. GForce still represents gay athletes while playing in mainstream tournaments, but it’s become a larger advocacy organization. Recently the group has spoken to the American Hockey Coaches Association, the University of Toronto and the University of Denver.

It was a trip to Boston, to speak to high school and college athletes on behalf of GForce, that most struck Goldstein. The mini tour included a forum with athletes and coaches from Boston College, Boston University, Harvard and Northeastern; Also on tap was a speech at the Northfield Mt. Hermon School, which sends more athletes to the Ivy League than any other (video of that speech is below).

While Goldstein had been a part of preaching-to-the-choir panel discussions, these audiences were filled with students, athletes and coaches from across the spectrum on the issue. Legendary college hockey coaches like Jerry York and Jack Parker sat with their teams and listened as Goldstein and other GForce members talked about the stinging power of gay slurs, among other issues.

“They were listening to us and asking questions about, ‘what do I do if an athlete comes out to me’ or ‘what should I be doing to change things’?” Goldstein said. “I’ve been part of these forums where you feel the people going are the people interested in changing homophobia in sports. But going right to these athletic teams and their coaches and having them ask questions…and they ask honest questions like, ‘are these gay athletes looking at us in the shower?’ Speaking to the athletes themselves is the biggest impact we can have instead of going to a panel that’s going to self-select the people who are interested in hearing about it.”

Now Goldstein is on a mission to recruit more athletes to push these tough conversations with athletes and coaches. His new challenge to gay athletes and allies is simple: Coming out isn’t enough anymore, you’ve got to get in the trenches, talk to more coaches, athletes an administrators and affect real change.

“Five years ago it was about coming out,” Goldstein said. “That was making a difference. I think now, that’s not enough. We need to be active and be vocal and educate people. What we’ve learned is the teachers and coaches are willing to help. They want to do what they can, but they don’t know what to do.

“Now I think we need to do more. A few voices saying something can only do so much, but hundreds of people going out and educating can make a big difference.”

The aim of his push is to stop the use of homophobic language in sports. This language contributes to an unfriendly environment for gay athletes, and that environment is what has driven so many gay athletes from sports.

“Homophobic language that goes around in sports and in schools shouldn’t be there, doesn’t need to be there, and I think won’t be there if people just realize the words they use are really hurtful, even if they don’t mean it,” Goldstein said. “If kids using terms like that don’t mean it, by all means we can get them to change it.”

Goldstein is now recovering from a hip injury that has kept him off the ice for months. As he sets his sights on prostate cancer, he is engulfed in work in his lab at UCLA. His partner, Jamie, a TV writer, isn’t much of a sports fan but supports Goldstein in his athletic endeavors.

Despite the hectic schedule, Goldstein has blossomed into a fierce advocate against homophobia and homophobic language in sports. We’re excited to see where that leads him next.