Out gay volleyball coach shares positive experiences, urges others to come out

Share All sharing options for: Out gay volleyball coach shares positive experiences, urges others to come out 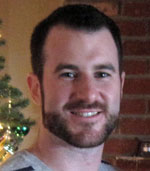 Nick Clark, 25, is the assistant men’s and women's volleyball coach at Pfeiffer University in Misenheimer, N.C.

I am just a little past the midway point of my first season as an "out" coach. It has been largely gratifying with few hiccups. I was hired by Pfeiffer University in May 2011, a month after an article was written about me on Outsports. I am so happy and thankful for the article. I was inspired by those who had articles written about them and I saw how much it helped me and I wanted to help others in return. I received many emails from people all over the country. All were positive. They shared their own lives with me. Some were out and others were still closeted. Some were athletes and others were just sports fans.

I have had such great reception from both the men's and women's volleyball teams at Pfeiffer. I was in a team meeting with the guys in late August when the students were returning to campus. It was important to me that I share with them my homosexuality from the start, to begin building trust. I didn’t want to go back into the closet and not share my life with them.

I was incredibly nervous and my heart was racing. It was well received and they really didn't comment all that much. Some of them had a stunned look on their face, while others already knew because they read the article. Within the next few days, I was approached by some of the guys and they gave me their support and let me know that they had my back. It was a major relief. I could do what I came here to do -- coach.

A few weeks later, a young woman approached me from the women's team. She is a member of the newspaper and asked me if I would give an interview about being a gay coach. I was happy to since I felt it was important for the students on campus to know that they have a resource to use. I also felt it was important that the athletic department knew that I was an out gay man.

I got nothing but positive feedback from the interview and was asked in September to speak to the Spectrum Club, the university's gay-straight alliance. The date was set for Oct. 11, National Coming Out Day. I was incredibly nervous and hesitated to answer. I love what I do and I don't care for the spotlight. I would rather work behind the scenes and help others achieve. But I knew it was important to give the speech, so I reluctantly said yes.

One morning, I was in my office, when the village pastor came in. He wanted to know if I would be interested in reading a scripture verse at church the day after I give my speech. I told him that I was interested but wouldn't commit for a few different reasons. The first being my job security. I was concerned that some board members or the president would be in attendance and seek to get rid of me. He reassured me that the university is committed to inclusion and works to provide an umbrella of safety for all of the students and faculty.

He also told me that he would not let a dismissal happen and that he was in my corner along with many other people within the administration. The second reason I was reluctant was because I didn't want to be viewed as endorsing the church. This is all coming at a time when the extreme religious right is seeking to take away rights for the LGBT community. He began to share with me details about his life and reassured me that those extremists don't speak for everyone. I told him that I would like to think about it. After going home that night and talking it over with my boyfriend, I decided that I would read the scripture, Isaiah 49.

The day came for me to give my speech. There was somewhere around 50 people there and I was told that was a lot for their meetings. Both volleyball teams were in attendance. The women even cut practice short to be able to come and listen. It was a great experience. People came up to me after and thanked me and asked questions. I received nothing but positive comments. The next day I read the scripture verse at church. The pastor gave his sermon about inclusion and loving all of God's children. It was great to hear and it's even better to see him everyday practicing what he preaches.

I share these experiences because they are all positive. I can’t imagine living life in the closet any longer and not being able to help change people’s minds about homosexuality. It is painful to read about gay teen suicides. I am a teacher at heart and this hits me the hardest. It’s up to us to make sure that the future generations have a safe and inclusive environment to grow up in. It is important for us to realize the position that we are in as coaches and athletes. We can make a change and a difference.

I was nervous about starting my new job and shared that with some of the members of Equality Coaching Alliance, a Facebook group conceived of as a virtual meeting place for coaches to discuss LGBT coaching issues. They threw their support my way and reassured me they will help me in any way possible. The group is ever growing with allies from all walks of life joining. The support is there and the safety nets are spreading throughout the country. It’s time for a change. It’s time for coaches and athletes come out and help make athletics safe.

Athletics is sometimes referred to as the last closet and it’s time we opened the doors.

Nick Clark can be reached via email at nclark85@hotmail.com or on Facebook.