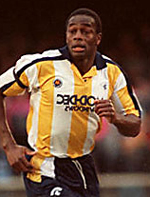 Amal Fashanu, niece of Justin Fashanu, the only professional British soccer player ever to come out of the closet, has worked with filmmakers to put together a documentary exploring why no gay soccer players have come out since her uncle.

Max Clifford, who reveals he has helped several Premiership stars keep their homosexuality secret in order to preserve their careers, goes further by insisting that the mentality of most people in and around the game remains in the Dark Ages. When Amal finally negotiates some access to straight premiership stars - from the Millwall dressing room - she learns that attitudes amongst many footballers may not be as bad as feared.

The documentary airs on BBC three Monday, Jan. 30, at 9pm.

Hat tip to Keith B.