Share All sharing options for: Shaq paying fans to get tattoo of Charles Barkley-Dick Bavetta kiss 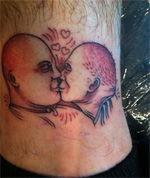 Shaquille O'Neal said last last week on TNT's 'Inside the NBA' that he would pay anyone $1,000 who got a tattoo of the famous kiss between Charles Barkley and Dick Bavetta. Shaq wrote: "I will pay one thousand dollars to anyone who gets a tattoo of that picture. Tweet me the pics."

At least one person, Santa Barbara-based bartender Emmett Bentley, has already accepted the challenge and executed said tattoo (picture above). Times are indeed tough. We hope Shaq pays up...with Barkley in attendance. Video coverage of Bentley's tattoo after the jump.