Super Bowl for the Clueless: We'll have a gay old time

Share All sharing options for: Super Bowl for the Clueless: We'll have a gay old time 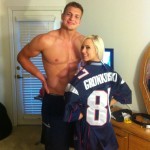 WHAT: Super Bowl XLVI (46 for you non-Romans) will be held Sunday Feb. 5 and features the New England Patriots (15-3) champions of the American Football Conference vs. the New York Giants (12-7) from the National Football Conference. The Patriots are a slight 3-point favorite, indicative of how close the game is perceived to be. The Patriots are 3-3 in Super Bowls, the Giants are 3-1. These teams met in the Super Bowl following the 2007 season, with the heavy underdog Giants shocking the then-unbeaten Patriots, 17-14, in one of the best Super Bowls ever. We can only hope this one is as good.

WHERE: The game will be played in a place synonymous with winter getaways – Indianapolis, at Lucas Oil Stadium (“The Luke”). The weather forecast for the week calls for temperatures in the 30s, with a chance of snow. So much for visitors getting in a round of golf. The Luke is a dome, so game conditions will be ideal unless they forget to close the windows.

Tickets to the game have a face value of $800 to $1,200, but many will sell for a lot more on the secondary market. One fan has already paid $16,480 for a ticket on the NFL's ticket resale site. Because this is a rematch of a recent Super Bowl and with Indy not being seen as a garden spot, resale prices are off 13% from a year ago (Packers-Steelers in Dallas), the L.A. Times reports.

KICKOFF/TV: The kickoff is set for 6:30 p.m. EST, shortly after Kelly Clarkson sings the National Anthem. You can get 2.5-1 odds that she'll miss some of the words and the over/under bet on the time it will take her to sing it is 1:34. Nothing can be worse than Steven Tyler's version prior to the AFC title game this year. (Click on this link only if you want your eardrums assaulted.)

The game will be broadcast on NBC, which does the best job of televising football, with Al Michaels as the play-by-play guy and Cris Collinsworth doing the analysis. Last year, Troy Aikman called the game for Fox, which resulted in numerous searches on Outsports of “Troy Aikman gay.” “Cris Collinsworth gay” doesn't get you the same results.

FASHION NOTE: The Patriots are the designated home team and will wear their blue jerseys. The Giants will wear white. If you're looking for a trend, teams wearing white have won five of the last six Super Bowls. The Giants have a classic helmet with “NY” on it, while the Patriots have a stylized Patriot head on theirs. It doesn't compare with the old sort-of-gay Patriot logo of a guy with his legs spread and a smile on his face, ready for action.

QUARTERBACKS: Tom vs. Eli. Tom Brady of the Patriots and Eli Manning of the Giants are so recognizable that any fan will know who you are taking about just by using their first names. Brady is one of those guys who transcend his sport. That's what being really talented, good looking and marrying a supermodel (Giselle Bundchen) will do. Brady is the ultimate metrosexual, a spokesman for high fashion, most recently Ugg footwear. Is Ugg short for “ugly,” since most Uggs I've seen look out of place unless you're stranded in the Himalayas?

Brady has come a long way from the infamous NFL pre-draft photo of himself in his underwear, but he took a step back last year when he channeled his inner Justin Bieber with a mop haircut. Brady is so big in Boston that his hairstyles are the talk of the town. By the way, he's a pretty good quarterback, too, a certain first-ballot Hall of Fame entry five years after he retires.

Manning was more known as the other Manning, second fiddle to older brother Peyton. But that has changed as Eli has taken the Giants to their second Super Bowl in five seasons, becoming an elite NFL quarterback. Despite living in the media hothouse of New York, Eli Manning lives a pretty low-key life, having married his college sweetheart in 2008. He also loves going antique shopping with his mom.

THE COACHES: Both Patriots Coach Bill Belichick and the Giants Tom Coughlin are rather dull personalities, though Belichick did have an affair with another guy's wife a few years back that became part of divorce proceedings. He also is the worst-dressed coach on the sidelines, preferring to wear an oversized gray hoodie that makes him look like a Star Wars character. As a coach, though, there's nobody better in football.

Coughlin is an old-school disciplinarian, voted by players in the league as the coach they'd least like to play for. But he does a great job getting the Giants ready to play, especially in the playoffs. An interesting side note – Coughlin's daughter is married to Chris Snee, a Giants offensive lineman.

THE GAY ANGLE: These are two gay-friendly teams. They represent two of the states where gay marriage is legal. Giants co-owner Steve Tisch and former Giant Michael Strahan made videos promoting marriage equality during the debate in New York last year. Patriots owner Bob Kraft and his late wife Myra also supported gay rights. In 2003, the Patriots sent a former player, Hall of Famer Andre Tippett, to toss the coin to open the Gay Bowl flag football tournament in Boston. Patriots safety Brett Lockett, who is on injured reserve, has appeared in the NOH8 campaign and openly supports gay marriage.

Then there's Madonna, who will be this year's halftime entertainment. …

ENTERTAINMENT: The Material Girl, now 53, is one of the great gay icons, which I can acknowledge, even as a non-fan of her music. One of her backup singers was quoted in the New York Daily News as saying she will be “bringing gay to the Super Bowl,” whatever that means. The NFL controls all aspects of the halftime show and does not want a repeat of Nipplegate, so expect a safe and bland show. Here is what Madonna told the L.A. Times about her preparations:

"I have 12 minutes and 40 seconds to do something extravagant and exciting in the middle of something that's quite sacred to all of America," she said. "No one's asked me to tone down my moves. They were curious about my costumes and the costumes of the dancers.... They were very clear with us up front that they don't want nipples or anything like that, and I didn't have any intention of doing that, so I was like, 'OK, we're cool.' I'm more nervous about this than most things I've done, simply because ... it's not how I'm used to working. I'm a perfectionist. I like everything to be done just so, and I like to run things and run things and run things until people can do it with their eyes closed."

THE COMMERCIALS: I am not one of those who gets all geeked up about the commercials, though there are a zillion places where you can already see trailers for some ads. At $3.5 million for a 30-second ad, advertisers are doing everything to call attention to themselves. One ad I will be interested in is the one by another gay icon, soccer's David Beckham, modeling underwear for H&M called “David Beckham Bodywear" I would bet that the average NFL fan doesn't know David Beckham from David Bowie, but I will be interested in seeing how much skin he shows; I bet he's in an undershirt or tank top at most.

“This is an American game played by American heavyweight talent for true blue-collar Americans: why do we need a metrosexual Briton like David Beckham there in his tightie-whities making us all feel out of shape?” wrote one jingoistic NFL fan on ESPN.com. “Or is it a trick to make the wives watch all four hours of the game?” 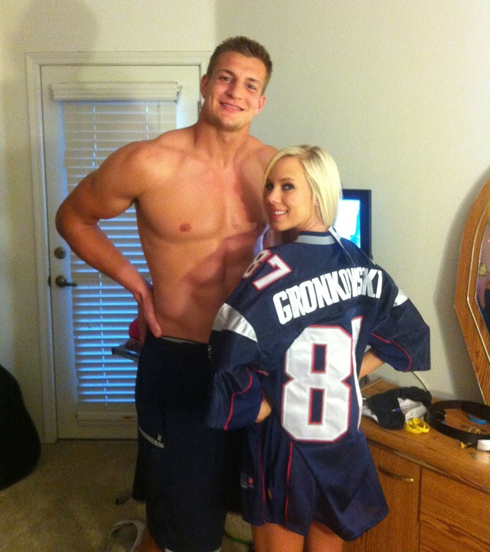 FOR THE EYES: This is not a game where I find a lot of hotties (unlike the last two years), but the Giants have the better-looking team. Brady is objectively handsome but he does zero for me, while guys like Welker are too red-necky for my tastes. Maybe it's the Patriot Way to look schlubby like their coach.

On the Giants, among the best lookers are defensive back Prince Amukamara, wide receiver Victor Cruz and tight end Jake Ballard. Backup David Carr for years was one of Cyd's lust objects, though I don't know if that's still the case. At least three players have rocking bodies – Gronkowski (see above), Giants punter Steve Weatherford and Giants special teamer Devin Thomas (see here). Feel free to list your hotties in the comments below since everyone has their own taste.

THE GAME: Flip a coin. Anybody who claims they “know” who will win is blowing smoke. These teams are evenly matched and their season stats on both offense and defense are extremely similar. The wonder is how the Giants lost seven games, including two to the 5-11 Redskins and one to the 7-9 Seahawks.

An injury could be a determining factor – Rob Gronkowski set an NFL record for touchdowns by tight ends with 15 and he is Brady's most dangerous weapon. He has a high ankle sprain and is not expected to practice all week, though he is set to play. This injury is one of the hardest for an NFL player to play through and it really limits mobility. I find it hard to see how Gronkowski will be able to effectively run or cut. If he is limited, this will allow the Giants to focus on the other tight end, Aaron Hernandez, and Welker. If free agent wide receiver bust Chad Ochocinco ever decides to come up big, now would be the time for the Patriots.

The key matchup will be the Patriots excellent offensive line against the Giants terrific pass rush. The Giants have nine sacks in three playoff games and their ability to pressure Brady will determine the game. Brady can dominate a game if he gets in a zone, but like any quarterback he becomes rushed and less accurate when harassed.

On the other side of the ball, the Patriots' shaky pass defense will have to contend with a talented group of Giants receivers, led by Hakeem Nicks and Victor Cruz. Cruz is the top big-play threat in the game and in the AFC title game the Patriots twice let Baltimore Ravens wideout Torrey Smith get deep. Lucky for them, Smith was underthrown on one pass (resulting in a long gain but no score) and overthrown on another (an incompletion). Don't expect them to be as fortunate against Manning and Cruz.

Neither team runs the ball consistently, though the Patriots use BenJarvus Green-Ellis quite effectively at times. I would call special teams a draw and give the coaching edge to the Patriots, but ever so slightly.

THE PICK: I think matchups are what win NFL games and the Giants match up quite well against the Patriots' strengths. I see Manning hitting a couple of long touchdown passes and the pass rush to be just good enough to slow down, but not stop, Brady. Giants 27, Patriots 21.