A look at the gayest (and straightest) Super Bowl halftime shows

Share All sharing options for: A look at the gayest (and straightest) Super Bowl halftime shows 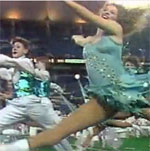 While this may be the "gayest Super Bowl ever," especially with Madonna as the halftime entertainment, Deadspin's Tom Scocca's reminds us that the big game has had a gay influence for a long time.

Scocca has put together an inspired and brilliant chart placing all 45 Super Bowl halftime shows on the Kinsey 1-6 scale. Disney's New Mousekeeters of 1977 are a 1, an "exclusively heterosexual" act, while I loved him putting the 1972 Carol Channing, Ella Fitzgerald and U.S. Marine Corps Drill Team as a 5.5 on the gay scale. Last year's Black Eyed Peas were rated "asexual." Comedy gold.