Johnny Weir's marriage and the mainstreaming of gays in sports

Share All sharing options for: Johnny Weir's marriage and the mainstreaming of gays in sports 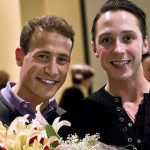 Figure skater Johnny Weir married his partner Victor Voronov in New York on Friday in a civil ceremony with a formal wedding planned for the summer. The couple is now on their honeymoon in the Dominican Republic.

What struck me was how matter-of-factly this was handled by the mainstream media. The Associated Press and Reuters ran short articles that was picked up by dozens of websites all over the U.S. and around the world. There weren't any grand "what does this mean" stories, just the kind of story one would read if a straight athlete married someone of the opposite sex.

I realize that Weir has been assumed gay long before he came out, so the fact that he married a guy isn't a shocker. But the fact that it was handled so low-keyed is a further sign that being gay in sports is no longer stunning and the same for two men (or women) marrying. I'm glad it was not front-page news, because most marriages aren't.