Share All sharing options for: 'Gay-Rod' and A-Rod a 'fag' tweets show the homophobic sewer that is Twitter 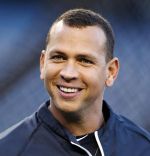 Alex Rodriguez of the New York Yankees has stunk this postseason, so badly that he was benched in the deciding Game 5 against the Orioles. He failed again in Games 1 and 2 of the ALCS against the Tigers, and this caused a torrent of homophobic abuse directed towards him on Twitter. From Deadspin:

Alex Rodriguez is both straight and male, but you wouldn't know it from the insults lobbed his way on Twitter over the past few days. Here are a few hundred examples.

Yes, "hundreds." "Gay-Rod" and "fag" are the two most common insults and it shows the worst thing about Twitter -- it's a sewer of homophobia, racism (ask Joel Ward of the Washington Capitals) and bigotry. The site No Homophobes has been cataloging the gay slurs on Twitter since July 5 and has these depressing stats on the number of times a term has been tweeted since as I write this:

Of course, most of these tweets come from people with a few dozen followers and as a believer in free speech, I would never advocate censoring such comments. It's just a sign of how coarse and mean people can be and how Twitter's instant publishing brings out the worst in some people, especially sports fans.