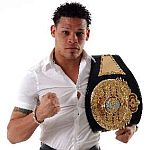 Featherweight boxer Orlando Cruz will fight for the first time since publicly coming out as gay. He will fight Jorge Pazos, Friday night at 11:35 p.m. EDT from Kissimmee, Fla. The fight will be televised by Boxeo Telemundo, an NBC network (check your local listings).

This will be the biggest fight of Cruz's career, especially in terms of media attention. From the Orlando Sentinel:

HBO Sports will be there to document the event, as part of a Real Sports episode that will air next week. BBC Sport did a piece. National Public Radio has called wanting an interview. A local boxing show is now a historic event.

Since coming out, Cruz has gotten nothing but support and is a man at ease. "I can breathe," he told the Sentinel about the freedom he has felt since coming out. Cruz spoke in this video with the IB Times: