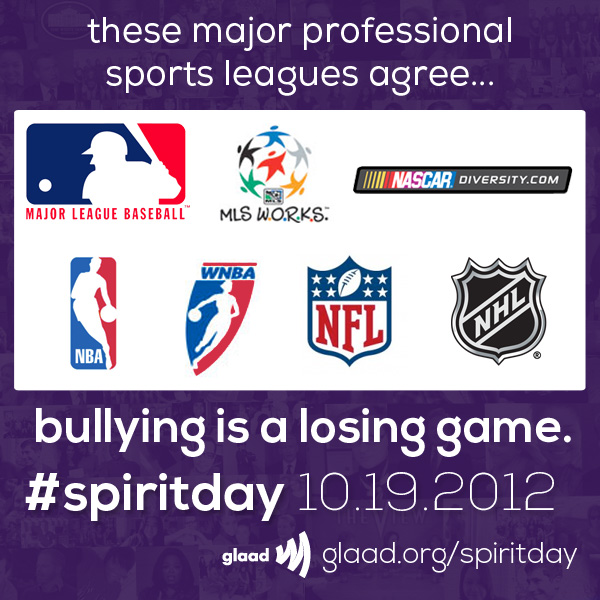 As we've said over and over, the sports world has transformed. In an unprecedented development, all of the major pro sports leagues in the United States have agreed to be part of GLAAD's Spirit Day on Friday. This would have never happened 10 years ago. From GLAAD:

The leagues join athletes like Shaquille O'Neal and Terrell Owens who have already pledged to ‘go purple,’ and sports organizations, including the GLAAD Amplifier Award-winning "You Can Play" project, GLAAD partner Athlete Ally, GO! Athletes, and UK Rugby champion Ben Cohen's Stand Up Foundation. World Wrestling Entertainment (WWE), like the NBA, will be taking part in Spirit Day for the second consecutive year. USA Track & Field will also participate by providing support through social media.

GLAAD has long tried to find its voice in the sports world. They've had fits and starts over the last 10 years, but they are now hitting their stride. Aaron McQuade at GLAAD has become a fierce advocate for sports within the organization, and he is making great inroads, including this powerful group of Spirit Day supporters.

While this likely won't change the attitudes of homophobes, what Spirit Day does is offer hope to those kids who feel alone. I interviewed one of them -- a former college baseball player -- last week. That feeling of isolation is very real, and this initiative does help.

Last year the NBA was the only league to join GLAAD's Spirit Day, but the others were not asked to be part of it. Aaron McQuade said he had talked to someone in MLB last year, but that person was not in the correct department and couldn't help.