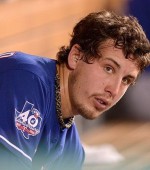 Texas Rangers pitcher Derek Holland says a tweet from his account calling a fan a "fag" was not sent by him and his account was hacked. The only other person with access to his account is his fiancee and she also says she did not send it. Major League Baseball is investigating. The Dallas Morning News has the background:

The tweet was sent in response to a heckling made toward Holland after he allowed four runs in the first inning of the Rangers’ eventual 8-7 win over Los Angeles. The tweet was removed from Holland’s account even before the pitcher found out about it after the game.

“This is not me and I had nothing to do with it,” Holland said. “I will let MLB figure out everything for me.”

After Holland was removed from the game, Holland got this tweet: "7 runs in 6-2/3. Horrible! But hey at least you've got that really good impression of Harry Caray. You're a waste of space." This prompted the tweet seen at right.

Baseball is very sensitive to homophobic comments following the Yunel Escobar eye-black incident. In addition, players are banned from tweeting during games. The team says it takes the matter seriously:

"It's not a term or sentiment we endorse in any way," general manager Jon Daniels said. "We asked Derek about it. He was not aware of it happening. We alerted MLB about it so that while we do our own investigation, they can do one as well.

"Nobody has admitted to doing it, so we don't know if it was somebody who had access to the account appropriately or if it was a hacker, but we're leaving that up to the investigators to figure it out."

Holland appears to have a good alibi since the Fort Worth Star-Telegram says the "fag" tweet was sent while he was pitching. This means either his fiancee is lying or someone hacked the account.