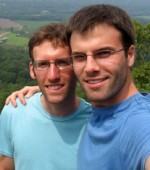 Matt Savoie, a member of the 2006 U.S. men's Olympic figure skating team, married his partner Brian Boyle at a ceremony this month in Sturbridge, Mass. The two men are lawyers in Boston and were engaged in November 2010.

"One thing that even our officiant talked about in our ceremony, and that Brian and I have experienced in this process, is that it's really wonderful to be in a state that recognizes marriage between gay couples, to be able to be understood as a couple in the same way that our parents understood each other and understand other married couples," Savoie told Lois Elfman of Ice Network.

"That validation is hard to describe. It's very important to us. We're really proud to live in a state that supports it."

Savoie, 32, won a bronze medal at the 2006 U.S. Figure Skating Championships and finished seventh at the 2006 Winter Olympics. Savoie is the second member of the 2006 U.S. Olympic skating team to be openly gay and married, joining Johnny Weir. The third men's individual skater that year was Evan Lysacek.

Elfman's story describes how Savoie and Boyle, 30, met at Cornell University Law School and how the wedding was planned, including the vows and first dance (they each danced with their moms). Bravo for them and may they have a long and happy marriage.