Minnesota Vikings punter Chris Kluwe has recorded a brilliant 60-second radio ad for Minnesotans For Equality (listen below) that plays off his "lustful cockmonster" comments about an anti-gay marriage politician. Kluwe is opposing a ballot amendment to the Minnesota constitution that would prohibit same-sex marriage.

The ad, produced by legendary Minnesota adman Bill Hillsman, has Kluwe being interrogated by government officials trying to tell him what he can and can't say. The "cock" in "cockmonster" is bleeped out and the ad is funny and breezy while making its point. Tracy L. Call, founder of Minnesotans For Equality explains the strategy behind the ad to Outsports:

The research shows that we are missing the boat and ignoring the most important demo that will move points in our favor -- independent, tougher skewing MEN. So with the we are buying Rock, Classic Rock and Sports [radio].

Strategically, the script broadens the appeal beyond gay marriage in a way that will draw in independents, libertarians, small government Republicans, and anybody concerned about government infringing on our freedoms. The story line is Chris being questioned by the government because he had the temerity to call an elected official a bad name. Repeating the bad name and bleeping out the bad word will be funny and gets listeners right into the spot.

Through the spot, Chris becomes the defender of civil liberties and people's right to raise their children as they see fit and marry whomever they love. And we make amending the constitution the only way the government can get away with this. By the end, it devolves into a simple yes/no argument, with NO being the right answer for people who are against government intrusion into their lives.

While use of a vulgarity might turn off some voters, my hunch is that they are anti-same sex marriage anyway. This ad can break through the clutter and compliments more traditional ads by other groups opposed to the amendment. With a limited ad budget, any free media will only spread Kluwe's message.

"I like the new ad because if sends a funny yet pointed message about the dangers of letting government dictate our personal life," said Kluwe.

Click on the Minnesotans For Equality logo below to hear the ad: 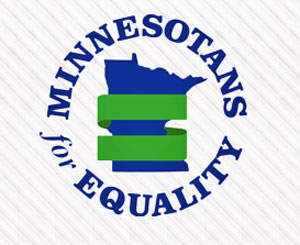