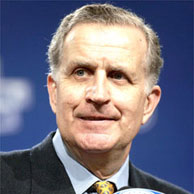 Former National Football League commissioner Paul Tagliabue announced last night that he and his wife Chan are donating $100,000 to Marylanders for Marriage Equality. The state is voting on a same-sex marriage law in November.

Tagliabue has long been out front on gay-equality issues. His son, Drew Tagliabue, is gay and is the executive director of PFLAG New York City. Tagliabue also introduced gay sensitivity training in the NFL rookie symposium. The fight in Maryland hits particularly close to home for the Tagliabues, as Paul noted last night, according to Michael Lavers at the Washington Blade:

“We had the privilege of raising our family in Maryland. We have the privilege of now living in the District of Columbia. We’ve lived in New York where they passed marriage equality. We spend time in the summer in Maine, where they are fighting it again. I think this is the time to view this not as an expense, but as a capital investment in our nation’s infrastructure."