Share All sharing options for: Producers of gay baseball movie "The First Out" start Kickstarter campaign to raise money 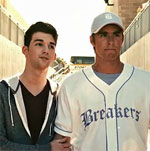 Scene from "The First Out" trailer

Producers of "The First Out," a film about a teenage baseball phenom who is outed after being drafted have started a Kickstarter campaign to raise money to make the movie. The film is written by Rick Bauer and directed by Joshua B. Porter. From the campaign pitch:

We are making a feature film about the first person in professional sports to "come out" before they're ready. Brad Hawley is eighteen years old, and all he wants to do is play the game he's loved since childhood. Some don't want him to play—not because he's a bad ballplayer or because he's an offensive personality—but simply because he's gay.

We feel that "The First Out" will help in the on-going civil rights struggle for marriage equality and will be another voice against bullying, hate crimes and discrimination related suicides. This story's time is now.

"I am a man. I am gay. I just wanna play baseball," the main character says in the trailer. The campaign has raised $7,500 of its initial goal of $30,000, with the deadline being Nov. 19. There is a nine-minute video that talks about the making of the film. My only quibble is that the most compelling part -- the trailer -- is tacked on at the end. I support independent filmmaking and we need more stories about gays in sports, so check out their pitch and make a donation if you can.