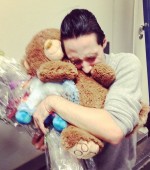 Weir after his Finland skate (from his Twitter feed)

Johnny Weir finished fourth in his return to men's figure skating at the Finlandia Cup in Espoo, Finland, this weekend.

The annual event is usually low-key, but the stands were packed, because the men's event had some pretty big hitters, including reigning world bronze medalist Yuzuru Hanyu, Spanish heartthrob Javier Fernandez and American Richard Dornbush, in addition to Weir.

I was looking forward to Weir's return to competition, but after this first test he still has work to do.

Weir may have finished fourth, but it was a distant fourth. His short program, to an instrumental version of Lady Gaga's "Poker Face," is not going to cut it into today's competitive rink. His preparation going into jumps needs to be shortened, his spins lack the speed required to get the levels you need to really be competitive into today's men's field.

"Pluses and minuses. God that was hard," Weir tweeted after his free skate. As for his short program, Weir said: "A little shaky, but I survived. Thank you Finland."

Granted, he hasn't competed since finishing sixth at the Vancouver Olympics in February 2010, but he's capable of putting on a better performance. He also must avoid using his exhibition pieces for competitions. His program had heavy deductions on his jumping passes; his quad was short of rotation – it had a 2-foot landing -- and he fell out of the jump. His triple lutz combination, which should be easy for him, lacked height and speed, and he really needed a triple/triple combination.

For the long program, Weir did not have the speed or the technical content of the the Top 3 finishers. He had several mistakes which is par for the course when you return after a lengthy absence, but his planned technical content was far beneath the Top 3. Hanyu landed two different quads, Fernandez has three attempts in long program, and Dornbush, has two quads planned for his free skate. Hanyu was the only one to land his quad attempts and he finished first. Fernandez said on Facebook that he came down with a cold; he landed his opening quad, and suffered from that point on, finishing third.

Dornbush finished second and stood out. I think he is a breakout star for the 2014 Sochi Games, and after a disastrous season last year, he looks like he has improved. His only mistake was on his second quad attempt, but he landed a triple lutz/triple toe combo and looks ready to challenge for gold at this season's U.S. national championships.

As for Weir, who married his partner Victor Voronov Dec. 30: We are all behind him 100%, but he has to change his skating to adapt to the times or get left in the dust.

Chad Conley is a former elite Canadian skater, who writes about the sport for Outsports. You can read his coming-out story here.