Remembering Christine Daniels on this Transgender Day of Remembrance

Christine Daniels was a pioneering trans sports writer for the Los Angeles Times. When she transitioned back to her former self and took her own life, it sent shockwaves through the trans community.

Share All sharing options for: Remembering Christine Daniels on this Transgender Day of Remembrance 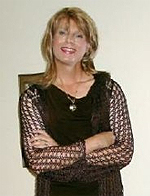 With today's International Transgender Day of Remembrance, my mind has wandered all day to Christine Daniels. Hers was a story of great triumph and crushing defeat. I remember the day Daniels wrote her first column for the Los Angeles Times, "Old Mike, New Christine." For years, readers had been entertained (and aggravated, like any good columnist) by the words of Mike Penner. Now Daniels was taking over, high heels and all. It had been a long time coming for a man who'd wrestled with his gender for years. We were finally meeting the real sports columnist.

It inspired me to write my column, "A woman behind the words." I was tickled to receive an email from Daniels the next day, in which she said she saw my column and invited me to lunch! "I am a big fan of the good work you and Jim do" made my day. As I further explored trans issues in my writing, Daniels was an inspiration. She popped up in the Out 100. Once confined to the shadows of the night, she was suddenly a woman about town. Friends told me her spirit soared.

Mike was a little quiet, a little reclusive, a lot brilliant. He hated going to locker rooms. He preferred staying home, making mix tapes and writing sentences that were chunks of perfection. He once described then-Angels GM Mike Port's fractured syntax as "Port-uguese."

Christine was the opposite: gregarious, 100 mph talker, always looking to cover an event, to be seen, the Funmeter pegged, the curls bouncing. She was flirty, always lightly grabbing your arm when she talked, covering her mouth when she laughed, which seemed like all the time.

At some point in the year or two after coming out, Daniels disappeared. Emails weren't returned. Friends wondered where she was. Daniels never resurfaced, and Mike Penner soon returned to the Los Angeles Times. Daniels was a persona of the past on the outside, though inside I can only imagine the turmoil this person faced. Three years ago next week, on Nov. 27, 2009, just over two years after coming out so publicly, so proudly, Penner killed himself. Daniels would never be heard from again.

Daniels' friends were not allowed at Penner's funeral. The family shamefully kept them away. Instead, Daniels' LGBT friends held their own memorial service, which I was fortunate enough to attend.

Since that time, I've been thrilled to meet so many more amazing trans folks in sports. I got to spend an evening with Christina Kahrl, an MLB editor at ESPN, when she visited Los Angeles a while back. What a superstar; And she knows way more about baseball than you do.

I was so proud to tell the story of college basketball player Kye Allums, who came out publicly two years ago this month. Kye was on the George Washington women's basketball team and is helping pave the way for more trans athletes.

Keelin Godsey is an incredible track & field athlete who nearly qualified for the Olympic Games in the hammer throw this past summer. Molly Lenore is the commissioner of my baby, the New York Gay Football League. Chris Mosier is a brave triathlete.

Then there are the other incredible folks, like Suzy Horn and Pauline Park, who have inspired me over the years.

But today, my thoughts lie with Christine Daniels. I was living too far away to take her up on her lunch offer, and I never got the chance to shake her hand. When you think you have all the time in the world, you don't make time. But today I'm thinking of you, Christine. I hope my words and actions in the coming days, months and years make it easier for people like you to live happily in this world.

Also: Daniels' coming out made our list of the top 100 LGBT sports moments.