Eli Manning: It hurts to take snap from a center wearing a cup

Share All sharing options for: Eli Manning: It hurts to take snap from a center wearing a cup 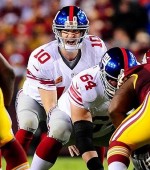 Last week I wrote about the curious phenomenon of NFL players not wearing cups despite the violence of the game. Sam Borden of the New York Times spent the week asking New York Giants players why no one wears a cup and he got this interesting take from quarterback Eli Manning:

Giants quarterback Eli Manning laughed — for several seconds — when the subject was posed to him. Then he composed himself and recalled that his only interaction with groin sanctuaries in football was when one of his teammates in eighth grade wore a cup. Manning reported that it was “uncomfortable.”

“I mean for me, not him,” Manning said. “He was the center and so he was snapping the ball to me all the time. Having the cup there, it hurt my hand.”

I guess the guy wore a really hard cup or Manning had sensitive hands in the eight grade. No one Borden talked to wore a cup on the field, even linemen. Defensive tackle Marvin Austin had this observation: “Hey, do you see horses wearing cups? No. They’re running all the time, and so are we.”

A need for speed seems to be the biggest factor in the decision to go cupless. Star pass rusher Osi Umenyiora did wear a cup for a brief time after training camp after his privates got whacked, but he gave it up since he felt it slowed him down.

Players on the Giants did allude to an unwritten rule that the groin is off-limits for players, but center David Baas said the fact this is even a story shows “some people always ruin it for everyone else.”