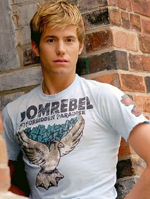 Jeff Buttle is a natural on skates, winning the world figure skating title in 2005 and the Olympic bronze medal in 2006. He still skates in exhibitions and has found a new ice outlet as a member of the Toronto Gay Hockey Association. The Hockey News has a great feature on Buttle's newfound sport.

Openly gay, Buttle is comfortable playing for the Toronto gay club and said playing the sport has helped his figure skating. But he still has a lot to learn about hockey.

He was also encouraged that his teammates were patient with his lack of knowledge of the game. He still often finds himself leaning over to a teammates in the middle of a game to have some penalty explained to him, but the team atmosphere is something he has embraced wholeheartedly.

"It's fun to have people depend on you," Buttle says. "It was totally new to me to have this feeling that you don't want to disappoint anyone. When I go out, obviously it's my fault if I screw up on the ice in figure skating, but in hockey you don't want to let the other guys down."

Buttle, 29, has gotten some assists, but is still searching for his elusive first goal.