Photos: It's celebration time in sports

Share All sharing options for: Photos: It's celebration time in sports 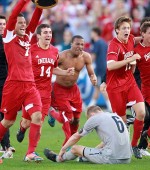 One of the joys of watching sports is seeing athletes and fans celebrate. The emotion is so raw, real and spontaneous that it makes for indelible images.

In the season of celebration, here are some cool shots from the past month of jocks and fans letting it all out in sports ranging from college and pro football to soccer and mixed martial arts.

Click image for larger view and that image for the largest view:

Photo 5: Georgetown Hoyas player Ian Christianson (6) sits dejected on the field as the Indiana Hoosiers carry the NCAA soccer championship trophy out onto the field after the game at Regions Park. (Photo by: Marvin Gentry-USA TODAY Sports)

Photo 8: Marcus LeVesseur, left, celebrates his victory over Abel Trujillo during their second round lightweight bout at MMA on FOX 5 at Key Arena. (Photo by: Joe Nicholson-USA TODAY Sports)

Photo 15: Arkansas State Red Wolves wide receiver Rocky Hayes (38) is held up as he and teammates celebrate after a touchdown by Hayes against the Middle Tennessee Blue Raiders at Liberty Bank Stadium. (Photo by: Nelson Chenault-USA TODAY Sports)

Photo 16: Kent State Golden Flashes fans celebrate after a first down in the first quarter of the 2012 MAC Championship against the Northern Illinois Huskies at Ford Field. (Photo by: Andrew Weber-USA TODAY Sports)