Share All sharing options for: Jason Ball to talk to young Aussie Rules Football players about being an out athlete 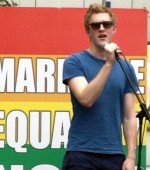 Jason Ball is a 24-year-old amateur Australian Rules Football player for Yarra Glen, a team located northeast of Melbourne. He came out in September as an openly gay player and now been invited by the professional AFL Players Association to talk to young players at the draftee induction camp in January. This comes along with news that the AFL is planning a "Pride Game" between the two teams that played in the Aussie Rules final this year.

"I'm really excited about the idea [of addressing the draftees]," Ball told Outsports. "Hopefully what I can bring to the players is a personal story of what it's like to be gay and play football and what homophobia looks like and how it affected me. People connect with personal stories, and it helps to compliment anti-vilification rules and regulations, which they would also be taught about during the induction.

"In order to make it relevant, I want to talk about how they as straight players can make a difference to the lives of their gay teammates. I can share how my teammates were so supportive of me and how it transformed my outlook and made me feel welcome in the game for the first time in my life after coming out."

Ball is also excited about the proposed "Pride Game" between Sydney and Hawthorn. The Sunday Age reports that details about the game are still being worked out but that it looks promising. Ball discussed his role in making it happen.

"The idea of a 'themed round' is not new in the AFL. They have an indigenous round, a multicultural round, and even a women's round. The AFL has been a leader in tackling racism not only in football, but also because of their size and influence in Australia their action often helps to shift attitudes and change minds in society more broadly. The idea of a Pride Round or pride game has been floating around for a few years now, but my petition on change.org helped it get more attention, and was a chance to show the AFL how much support such an idea would have from the football community."

Since coming out, Ball has gotten a fair amount of attention, despite being an amateur. It shows that the pro game still has a ways to go but that people are ready to accept a gay footballer. He has also been surprised by the reaction, including from athletes.

"The reaction has been overwhelmingly positive," he told Outsports. "I think the game, the public and the media are ready to see gay players an an elite level, but so far no one feels comfortable enough to come out.

"I have heard from a lot of gay players at various levels of the game since launching the campaign. Some stopped playing at a young age because they couldn't deal with the homophobic culture. Others stayed in the closet throughout their entire football careers. Others are currently playing and in the closet and are petrified of being found out. Some gay players at an elite level are only 18 or 19, and haven't even come out to their friends or family yet.

"There is still along way to go, but I'm glad to see that progress is being made, and that we are seeing leadership from the top within the AFL to say no to homophobia and create a more welcoming and inclusive culture in the sport for gay players and supporters."