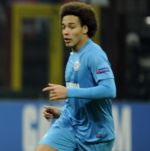 Axel Witsel is the only black player on Zenit St Petersburg. (Photo by Claudio Villa/Getty Images)

Any gay person or person of color thinking about venturing to Russia for either the 2014 Winter Olympics or 2018 World Cup needs to realize they won't be a welcome in a country that is still quite racist and homophobic. The latest example comes in soccer.

A Zenit St Petersburg supporters' group has called for non-white and gay players to be excluded from the team. The Russian champions' largest fans' group, Landscrona, said in an open-letter that black players are "forced down Zenit's throat".

They added that gay players are "unworthy of our great city".

Black players in Russia have had bananas thrown at them and been greeted with monkey chants. Zenit's director said all players are welcome on the team, but until this summer they were the only top Russian club to never have a black player. Maybe it had something to do with this:

Several prominent black players have turned down lucrative offers from the wealthy club over the past 12 months after receiving death threats from Zenit fans.

This fall, the Federation of Gay Games skipped a sports unity conference in Sochi, Russia, saying the safety of its delegates could not be guaranteed.