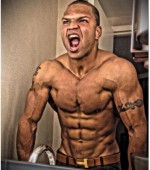 Baltimore Ravens linebacker Brendon Ayanbadejo has been perhaps the most outspoken pro athlete for gay rights and he continues to give great interviews. The latest is with Alex Marvez of Fox Sports, where Ayanbadejo theorizes that there are not as many gay NFL players as gay people in the general population.

Marvez: Finally, how long do you think it will be until the first active gay NFL player emerges?

Ayanbadejo: “That’s a good question. I don’t know. I have a whole theory that some people would believe is kind of counterintuitive to a lot of stuff that I preach about LGBT rights. In no way am I trying to offend the LGBT community. But my theory after playing in the NFL for so long is that there are certain traits NFL players have and don’t have.

Now, if there’s a negative thing about NFL players, we tend to be angrier (than non-players). We clearly have higher testosterone because you have to genetically to play this game. With that comes bipolar (disorder), split personality and certain negative things. That’s not everybody, but I think the rate is higher than the general population.

“I believe that there are not as many gay people in the NFL as in the regular population. This is a discussion I’ve been having on Twitter for quite some time now. Some people say, ‘You’re stupid.’ But even though there is not yet a proven gay gene, I believe people are born gay. It is a natural phenomenon.

“There are definitely gay players in the NFL. I’m not saying that there are not. Some people say the gay guys in the NFL aren’t coming out because they’re scared and worried about what’s going to happen to their careers. But I think the first person who comes out and says they are gay, everyone is going to write a book and do stories about them. They’re going to make a lot more money by saying they’re gay than by not saying they’re gay. But are we ready to hear that? Is that person going to be comfortable to do that? I don’t think they are right now because of society and the way things are.

“Eventually, I think there will be someone. But the number (of gay players) is so minute. If they say the regular population is 7 to 9 percent (LGBT), in the NFL it might be 3 percent. I could be completely wrong, but I’ve played for so long and so many others have. When you hear players coming out that are retired, they are few and far between. Why wouldn’t we hear about more players if it’s the same percentage like in the regular population?

“What I’m saying is controversial. There is no proof. It’s just my theory.”

I respect his theory and it might be true. People studying the issue of gays in sports think there is a lot of self-selection going on, where gay athletes drop out of team sports because they know how tough it could be to either come out and face the consequences or stay closeted and be miserable. If this is the case, this could drop the percentage in pro team sports.

It doesn't matter, though, what percentage of NFL players is gay. If Ayanbadejo's numbers were true, that would still mean there are 51 gay pro football players, more than one for every of the 32 teams. If that many came out at once, it would be the biggest sports story in decades. The fact that none have ever come out while playing shows the power of the closet and why we need people like Ayanbadejo speaking out.

Read Marvez's entire Q&A with Ayanbadejo; I enjoy what he says about being named an "honorary gay."