Gymnast Louis Smith would strip for a gay magazine

Share All sharing options for: Gymnast Louis Smith would strip for a gay magazine 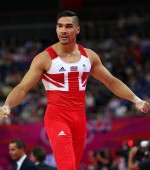 British Olympic gymnast Louis Smith is straight but he said he would gladly strip for a gay magazine because he's become something of a "gay icon." The gymnast, competing on Britain's "Strictly Come Dancing," told the Mirror:

“I get lots of attention from females as well as males. It’s a bit strange. ­Apparently I’m a bit of a gay icon. I’d go topless for [the English gay] Attitude magazine. I’m not a shy guy when it comes to getting your kit off and taking pictures.

“I know I’m not fat and won’t look offensive, so it’s fine.”

Smith also said he would do underwear ads, but wants to be paid well for it. I think it's cool Smith knows what Attitude is and he's certainly confident enough in his looks to show off.

Photo: Louis Smith reacts after he competes on the pommel horse in the Artistic Gymnastics Men's Team final on Day 3 of the London 2012 Olympic Games at North Greenwich Arena on July 30, 2012, in London. (Photo by Michael Steele/Getty Images)