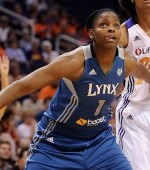 Amber Harris and Jessica Adair play pro basketball for the Minnesota Lynx. Both are also openly lesbian and both are African American. “You got two strikes against you — you’re Black and you’re gay,” says Adair in an interview with Charles Hallman in the Black and female-owned Minnesota Spokesman-Recorder.

The newspaper was writing about a report that finds that LGBT people of color feel like "double-outsiders" in their communities. The problems start in the family and are often influenced by religion.

“A lot of African American communities are more on the religious side dealing with homosexuality,” concurs Adair. “My mother is very religious — she’s more open now because I have been out for so long. But initially, she thought it was about sports, drugs, sex, and that was it for all lesbians. So when I went out of the house, that was all she could think of, was that I was going out to have sex and snort coke or smoke weed.”

Harris and Adair are not the only openly lesbians on the Lynx. They are joined by Seimone Augustus, a 2012 U.S. Olympian. Adair said that despite the perception that "all female athletes are lesbians," there were only two gay women on her college team of 15.

Both Harris and Adair see much more acceptance of their sexual orientation among people under 30. "It is a lot more liberal — ‘Be who you are; be free and be happy,’ ”says Adair.