In a really weird and offensive column, Martin Samuel of the London Daily Mail says that Joey Barton of the English Premier League (on loan to a French league) should come out as gay. For some reason I don't fathom. Even though Barton is straight and married. As I said, it's a weird column, but it's pissed off a group trying to end homophobia in soccer.

"Could just one footballer please come out and be gay, so everybody can be really cool about it and the sport can get on with its life? Just one, it’s not much to ask surely?" wrote Samuel. ...

"So here’s a thought. Joey Barton continues his quest for intellectual and social respectability. Why not come out as gay?"

I guess Samuel's point is that by coming out, Barton will be immune from any criticisms or actions since no one would attack such a role model. Barton has a checkered history and twice was convicted of assault. Being openly gay would allow Barton to get away with anything, Samuel reasons: "Well, of course he put his cigar out in that bloke’s face, Gary. He was a tortured soul, forced to live a lie." He also mocked Barton's French accent, since it's -- you know -- kind of gay.

Barton is livid and is threatening to sue Samuel. Earlier this year, Barton revealed that he has a gay uncle and supports an openly gay player in the sport. "There is no doubt in my mind that in the next 10 years we have an openly gay footballer,” he told the BBC. He tweeted this about the column: 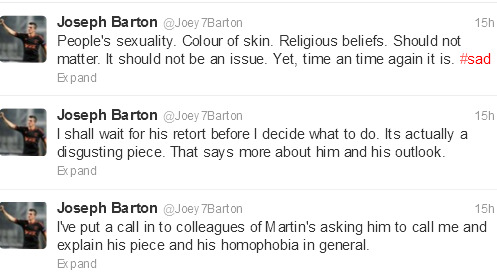 The Gay Football Supporters Network was livid with Samuel's column. From the Pink News:

Responding to the row, Chris Basiurski, chair of GFSN said: “We find Martin Samuel’s comments in the Daily Mail regarding Joey Barton today unhelpful as they distract from the more important message of trying to create a positive atmosphere in football for LGB&T people.

“It does nothing to address the very real experiences of homophobia we see in football on a regular basis. We welcome Joey Barton’s positive contribution to the debate in the past and hope he is not discouraged from supporting the LGB&T community in the future.”

The Daily Mail has disabled comments for Samuel's column, posting: "Sorry we are unable to accept comments for legal reasons." Britain's libel laws strongly favor individuals over the media, so unless Samuel tries to claim the whole column was a put-on, he might be in some legal hot water. Serves him right.