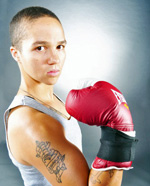 Patricia Manuel of Long Beach, Calif., is competing this week in the first Olympic boxing trials for women. The 2012 Games in London will feature women boxers in three weight classes. Manuel (49-14) competes in the lightweight division (132 pounds).

She is part Irish, Mexican and black. And as the Long Beach Press-Telegram reports, she is also an out and proud lesbian.

Manuel takes pride in being a female athlete and a lesbian. She hopes to use the Olympic stage as a platform to encourage other gay and lesbian athletes.

"I want to show people this is America, too: a butch, multiracial boxer," she said. "I want people to know I am gay and can do great things."

Regardless of how she does at the Olympic trials, Manuel wants to help other gays and lesbians. I found this passage cool:

For now, she works valet security at Hamburger Mary's in Long Beach and wants to teach self-defense and boxing to homeless gay youth. She also hopes to inspire them. "I know there are people having difficulty with their sexuality," she said. "If someone sees a proud butch lesbian and it helps them, that's great."

I will update this post once the Trials are over. If she survives this, she will compete in the world championships in May and needs to finish in the top eight to get to London. I will be rooting for her to make the team and have a bigger audience this summer.

Update: Manuel had to withdraw from the competition due to a chronic shoulder injury that flared up again after her Monday fight. "I'm sorry my story ends like this," she texted the L.A. Times.