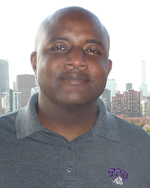 Vince Pryor, who was an out football player on his TCU team in 1994, was honored by an Austin, Texas-based gay rights group for showing "an extraordinary amount of courage to come out as a gay athlete." Pryor was honored at a lunch of the Atticus Circle and then posted this wonderful news on his Facebook page:

I asked Alan to marry me today at the Atticus Circle luncheon. He said YES! We're getting married!

Pryor and his partner, Alan Detlaff, met at TCU, have been together about 12 years and they live in Chicago. We told Pryor's story last year about how he came out as gay to his teammates during his senior season as a TCU defensive lineman. In the first game after coming out, Pryor set a single-game school sack record that still stands. This is my favorite quote from Pryor about the power of coming out:

Congratulations to Pryor on the award and, more importantly, to Pryor and Detlaff on their upcoming marriage.

Pryor, left, and Detlaff bleed purple in rooting for their beloved Horned Frogs: 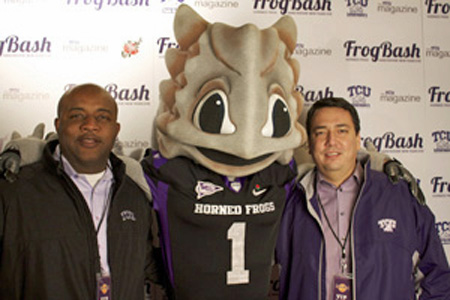