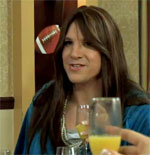 This is pretty funny -- Five members of the Indianapolis Colts dressed in drag for a skit on Jimmy Fallon's NBC show spoofing the "Real Housewives" franchise (video below). How rare to see any American pro athlete do something like this. And there was even a Tim Tebow reference.

The Colts come into the skit shortly after the three-minute mark.