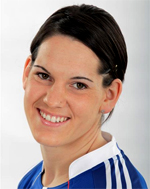 We now know that at least one out lesbian will be participating in the Summer Olympics in London. Alexandra Lacrabère came out to little fanfare in the French magazine Hand Action last November. Yagg.com caught up with her recently and she talked more about being an out lesbian in the popular French sport. Via a rough translation:

Your colleagues in the France team were aware that you're gay?
In fact, everyone knows about me. My family has always accepted. In the middle, people know I'm gay and it's not because I'm gay that clubs do not want me. In the France team, there has never been any barriers between us.

Do you feel now to have a job to do?
No, but if talking about it can change attitudes, it is. I think it's a matter of education. Anyway, everything starts from there. My family has always accepted. My nephews, for example, know that I'm gay, it's never been a problem. We are not aliens, we are human beings.

She also told Yagg.com that she came out in Hand Action magazine simply because the reporter asked her a question about how she spends her time, and she couldn't answer honestly without mentioning her girlfriend. It says a lot: Sometimes you just have to ask the question to get the answer.

According to Yagg.com editor Judith Silberfeld, Lacrabère is one of the top players on the national team that finished second to Norway in the World Championships.