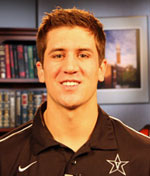 Jordan Rodgers, quarterback at Vanderbilt University and the brother of Green Bay Packers quarterback Aaron Rodgers, was among students speaking out against the school's nondiscrimination policy as it applies to student groups, especially religious ones. Rodgers is a member of the Fellowship of Christian Athletes, which is opposed to homosexuality and whose website talks about "saving" gays from their "lifestyle."

The policy at Vanderbilt came into being after the Christian fraternity BYX allegedly kicked out an openly gay brother in 2010. From the Nashville city paper:

Under the "all-comers" nondiscrimination policy, Vanderbilt requires that all organizations' membership and leadership positions be open to every student on campus regardless of "race, sex, religion, color, national or ethnic origin, age, disability, military service, or genetic information." Several student organizations, most of them religious, have been deemed as non-compliant because of religion-centric qualifications for leaders.

The university put five Christian groups, including the Fellowship of Christian Athletes, on "provisional status" after they ignored the nondiscrimination policy when filling leadership positions. The school defends the policy, saying, for example, a non-Christian should have the right to run for a leadership position of a Christian group. It's a policy that seems rather non-controversial since the members ultimately decide whether they want that person to lead them or not. But Rodgers disagrees:

"If someone [running for leadership] doesn't share the faith that is being taught, what's the point of having these organizations?" asked Rodgers, an active member of the school's Fellowship of Christian Athletes. [Vanderbilt administrator David] Williams responded by saying members of the FCA could collectively choose not to elect a non-Christian — but that person should at least have the opportunity to run for office. Rodgers conceded that a non-person-of-faith wouldn't be elected.

"If we're jumping through the hoops of your policy as a facade, what's the point?" Rodgers said. Williams acknowledged that the school wouldn't make exceptions to the policy for faith-based organizations and that he understood the opposition.

For the record, I could find nothing where Jordan Rodgers stated his views on gays, pro or con. (Update: Read the thorough comment below from reader PJMc who watched the whole debate and noted: that Rodgers "openly said that he does not think gays should be allowed in 'his Christian group.' ")

As an organization, though, FCA's application for leadership includes this "sexual purity" clause:

The FCA's website also has a story by a female college coach who writes about how she "was delivered from homosexuality." It's safe to say that FCA is not pro-gay, even if some of its members are.

We ran a story in 2010 by a cross-country runner who was gay and also an active member of FCA, who wrote about how he was accepted by fellow athletes:

My relationship with Christ has been growing stronger since I came to terms with my sexuality because there is no place in the Bible that condemns homosexuality. Just because I am gay does not mean that my interpretation of Christianity is any different from another’s. The Bible says the same message to all who open up to the Word, and just as Christ does not change, the Bible never changes. I am no different from any other Christian in my beliefs. I am just different in my personal life, which should not have anything to do with my faith.

Then there's this from the great website Post Secret, where people send in their deepest secrets on a postcard: 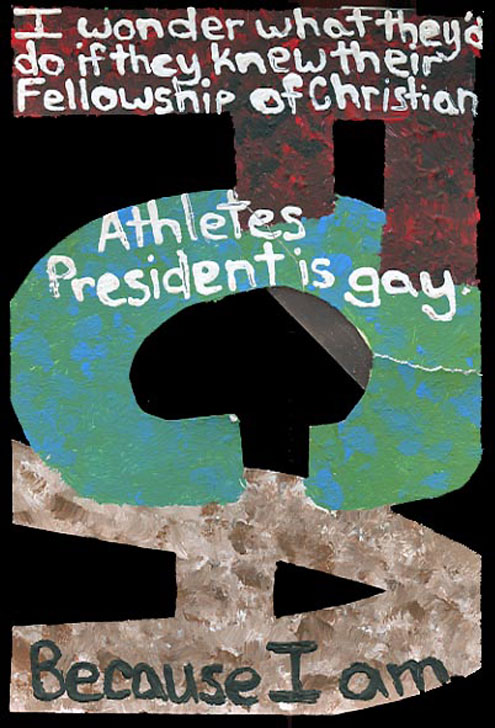 2013 Update: Jordan Rodgers says he would have no problem with a gay teammate.