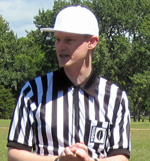 American football is far from a popular sport in New Zealand, where rugby is king. But that hasn't stopped Stephen Bowness, 46, from his love of the game as a referee there for 17 years. He is also openly gay and recently made history by being the first Kiwi to be head referee at an international American football game. He shared his story with Outsports.

My name is Stephen Bowness and I'm New Zealand's leading American Football referee. I'm also gay, which I think is a first at this level. And I made a little bit of history recently.

Two weeks ago I had the honor of being the first New Zealander appointed as referee for an international American football game when I worked an IFAF Junior World Cup Qualifier between Australia and American Samoa on Australia's Gold Coast. This was my sixth international, but this was my first time in charge and we had the extra challenge of a flooded field to deal with. The Gold Coast had experienced constant heavy rain in the days leading up to the match, which meant that any attempts to mark the field met with failure. We had no opportunity to postpone the match, so we ended up marking the sidelines with cones and used the soccer goal lines which are permanently marked on the field, which shortened the field by around 5 feet at each end. The line judge made all calls regarding first downs as we would never have been able to measure. It was a very one-sided game, with American Samoa winning, 93-7, to qualify for the tournament in Austin, Texas, in June.

My being openly gay has not been an issue for me. While I don’t go out of my way to publicize the fact, I don’t make a secret of it either. Anyone who Googles my name will easily discover that I am also the Musical Director of Auckland’s Gay and Lesbian Singers, a fairly prominent position in the gay community here. My colleagues all know that I’m gay and both they and my Australian colleagues were most supportive of my desire to add my name to the other gay and lesbian sportspeople who are making themselves known in the media at the moment. 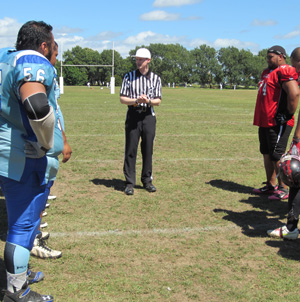 A number of our players also know. A few years ago I was working a Friday night game on my birthday. As a special treat, some of the players offered me a visit to the locker room after the match. I politely declined their offer and the whole thing was done in good humor. However, it should also be said that the players could make my life difficult if they chose to do so. Many of them are from conservative Pacific Island backgrounds and all of them are significantly bigger than me.

American Football in New Zealand is a minor sport - a very minor sport. We have two competitions, one based in Auckland with five teams from Auckland and one from nearby Hamilton (this year’s champions) and another with three teams from the capital, Wellington. In Auckland we have around 200 players at a senior level with similar numbers at the Colts and Junior levels. The game has been played here since 1983 and we have just completed our 30th season. As we compete for grounds and players with Rugby and Rugby League we play from November to February, our summer. The game is developing slowly, but has seen regular setbacks over the years. In Auckland we have just nine officials to cover the three senior matches each Saturday (we are unable to cover the youth grades at all) and not all of those are available for every game as some of us are also players. This season, most games were covered by the same core crew of four with a fifth official added for many games. We often found ourselves working three matches in a day (our matches run for around two hours and we have about an hour off in between with all games played at the same ground) and we were lucky this season to have cooler weather for most games with the temperature averaging around 65 degrees. We have played games in temperatures close to 90 degrees with the humidity above 90%.

The level of play is around that of high school in the US, which provides a challenge for those of us who want to progress to higher things. We are very isolated here, so we work very closely with our friends in Australia. We have enjoyed clinics with now-retired Big 10 Referee Dick Honig (whose company supplies all of our equipment) and current Big 10 Referee Bill Lemonnier and I also get support and mentorship from NFL Referee Jeff Triplette, whose crew I spent a day with a few years ago. We maintain relationships with colleagues in Britain (where I worked a game between Sweden and Australia two years ago) and Europe in an effort to share knowledge and experience.

What got me interested in refereeing American Football? At school, I was a very reluctant participant in sports. In a last ditch attempt to get me involved, one of my teachers encouraged me to judge for school rugby matches and to umpire cricket. When I moved to New Zealand in 1982 I continued umpiring cricket at a premier club level in Auckland until my 20s, when I developed colitis. This got so bad that I couldn’t continue and eventually I needed surgery to remove my colon. Meanwhile, the TV networks here began to show weekly highlights of the NFL and, when satellite TV came to New Zealand, we got to see full NFL and college matches each week. By the time I was ready to take up my officiating career again I was hooked on the game and decided to give it a go. I have just completed my 17th season.

I love the game because, for the officials in any case, it’s surprisingly cerebral. The rules are intricate and require constant study. You work as a team and we all have our own responsibilities and zones of coverage. We therefore need to trust and rely on each other to do our jobs and there is a great sense of camaraderie among us. You make decisions on every play. If you detect an infraction of the rules you have to consider whether it gained an advantage or breached player safety before throwing a flag. I have tremendous respect for those officials working in the NFL and at the top levels of the NCAA, particularly the head linesmen and line judges. With the amount of information they must process on every play and the speed of the players it is incredible how accurate they are.

In New Zealand, we are desperate for gay and lesbian sporting role models at an elite level. Here, the All Blacks (our world champion national rugby team) are the gods of sport, but there has never been an out gay rugby player here at a provincial or national level, either active or retired. Our only out gay professional sportsman, Olympic Speed Skater Blake Skjellerup, does an amazing job of maintaining visibility and fronted an anti-bullying campaign here during his off-season break. He’s a great role model for young New Zealanders and hopefully will encourage other young sportspeople to be open about their sexuality.

I hope that in years to come in the so-called ‘macho’ sports like rugby, Rugby League, American Football and soccer we will see people coming out. There is the implication that you cannot participate in these sports if you are gay (English soccer has a particular problem with homophobia) but the coming out of Welsh rugby player Gareth Thomas, Welsh Rugby referee Nigel Owens and recently Australian Rugby League referee Matt Cecchin have shown that this is not the case. However, we need more pioneers and a concerted effort from those who run our sports to modify the behavior of the ignorant before we can no longer feel that a gay or lesbian player coming out is a newsworthy event.

Stephen can be reached via email at sbowness@ihug.co.nz.