The "You Can Play Project" has a simple, yet powerful message

Share All sharing options for: The "You Can Play Project" has a simple, yet powerful message 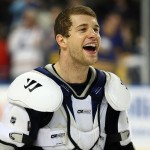 It's been more than a week since the "You Can Play Project" was launched by Philadelphia Flyers scout Patrick Burke to honor the legacy of his late brother Brendan. The project features more than 30 NHL players who voice the simple message about having a gay teammate -- If you can play, you can play. The notion is both simplistic, yet powerful.

For the most part, the gay sports community has yawned over the project. People are grateful for the support, no doubt, but it has not been a hot topic. And it's understandable why -- we've known for years that gay athletes can play, so the campaign has a dated feel to it. But the gay community is not the target. Burke knows his audience and that's where the power of the campaign lies.

The reaction has been much different in the mainstream media, with every major outlet writing about the project and the players involved and treating it like a significant story. NHL.com has gotten squarely behind it and there is a very detailed story about how involved the New York Islanders have been. Said Islanders center Frans Nielsen:

“Ten years back, this never would have happened, so I think we came a long way,” Nielsen said. “No one has an issue with it. You’re going to hear more about it, not just in hockey but in all sports.”

“If it’s a teammate, if it’s a friend from back home, I’ll still be your friend, your teammate. It won’t change anything. It’s definitely going to happen on teams in the future. I think everybody would be supportive of a guy on the team.”

"Everybody would be supportive." Wow. That flies in the face of years of hearing how "impossible" it would be for a pro athlete to come out, especially in the lockerroom. Yet Nielsen, and the 30+ players with "You Can Play" say otherwise. They would support a gay teammate.

That's why the project has a real chance to effect change and lead to an openly gay NHL player. There will always be many more straight than gay pro athletes simply because of demographics. Having straight allies is crucial to a gay player feeling comfortable in coming out since he will always be outnumbered. "You Can Play" knows this, which is why the group's tag line is: "Gay athletes. Straight allies. Teaming up for respect."

A gay athlete does not need everyone on his team to want to march in a gay pride parade or campaign for gay marriage -- he just wants to be accepted as one of the guys and given the right to play the game he loves. The campaign is decidedly "apolitical and a-religious," according to Burke. This is how it should be -- all of us work in environments where we don't share (or even know about) the religious or political views of many co-workers, but only care that the job gets done properly and everyone is respected.

In the team dynamic, this means casting aside your differences and playing together to win. It reminds me of the line once uttered by a Green Bay Packer about legendary coach Vince Lombardi -- "he treats us all the same ... like dogs." Lombardi had a gay brother he was proud of, so he never distinguished between the gay "dogs" and straight "dogs" on his team; he would very much have been a "You Can Play" kind of coach.

Burke got the name for the project from a tribute he wrote for Outsports about his late brother Brendan, himself an openly gay member of the hockey community. He told Yahoo:

"I liked the way it sounded. It was a simple expression that players could use and that fans could use to let people know that the sports world is more welcoming than people think."