Share All sharing options for: Bryan Fautley of Queen's University volleyball comes out, returns to team 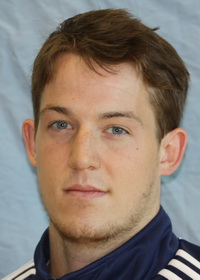 From Queen's University in Kingston, Ontario comes a fantastic story about a gay athlete and his redeemed college volleyball team. Bryan Fautley had quit the team in 2010 because he was closeted and could not handle the casual homophobia on his team. When the coach found out the reason for his resignation, she changed the culture of the team and eventually was able to welcome him back. From the Queen's Journal:

“I still remember team huddles where [players] would say ‘Let’s beat these faggots up’ or ‘We can beat these guys because they’re a bunch of faggots,’” Fautley said. “It’s hard to get amped up for a game when, right before you walk on the court, you hear something like that.”

Fautley was close to a breaking point after a 12-day winter tour through Europe, where he ate, slept, trained and travelled with the team. Before the trip, he was distant from his teammates — now he resented them.

“When someone says a homophobic slur and you’re in the closet, you have no grounds to say anything, so you take it,” he said. “Not only do you take it, but you remember it in your head, and it compounds.

If anyone tells you that casual homophobia doesn't have an impact on gay athletes, they should read this article. And if the occasional homophobic slur would drive an athlete to leave a team, imagine the impact of having a coach continually call you a sinner and say you should face discrimination!