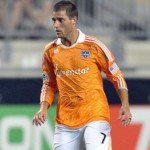 Colin Clark, a midfielder for the Houston Dynamo in Major League Soccer, apologized on his Twitter feed after calling a ball boy a "faggot" during a game Friday in Seattle (video below). From the AP via ESPN.com:

Clark ... can be seen in a video replay jogging toward the sideline for a throw-in, appearing to signal to the attendant for a ball as the game ball skips out of bounds.

After Clark is issued a new ball at his feet and forced to pick up the ball, he utters a gay slur toward the ball boy before making the throw-in. 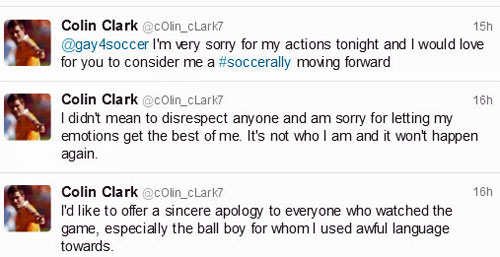 The Dynamo issued this statement to Gay4soccer:

We are aware of the incident involving Colin Clark during the Seattle match. Colin is very remorseful for his actions, which were inappropriate and do not represent his true character. He has issued a public apology and he will personally apologize to the ball boy. The League is reviewing the situation to determine disciplinary measures. Colin and the club will be fully cooperative in the process.

Clark's apology seems sincere, which is good, but simply posting something on Twitter is not. Plus, he yelled the slur at a ball boy (not sure how old he is), which makes it worse since that person is not in any position to fight back. He needs to be disciplined via a fine and suspension (one site urges MLS to "throw the book at him"). His actions were uncalled for, even in the heat of competition.