What punishment should Colin Clark get for calling ball boy "faggot"?

Share All sharing options for: What punishment should Colin Clark get for calling ball boy "faggot"? 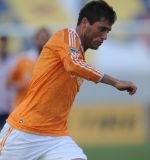 Major League Soccer is investigating Friday's incident where Houston Dynamo player Colin Clark called a ball boy a "faggot" during a game in Seattle. Clark was mad that the ball boy threw in a ball low, forcing him to bend down to pick it up.

Via Twitter, Clark said he was sorry, and asked to be consider a "soccer ally" to end homophobia. MLS officials are investigating before handing down any disciplinary action. Put on your MLS commissioner hat and tell us what punishment you think Clark deserves.

I think he needs to be both fined and suspended. His outburst was uncalled for, both for his use of language and for verbally abusing a minor. Clark's 2011 salary was $98,000, so a $10,000 fine would send a clear message. John Smallwood of the Philadelphia Daily News has his opinion:

When [MLS Commissioner Don] Garber and MLS complete their investigation into the matter, and it shouldn't take long given the clarity of the audio on the broadcast, Clark needs to be whacked, not just slapped on the wrist.

Some people may think it unfair or a "politically correct" overreach, but Clark needs to be made an example. Garber needs to suspend him for at least three to five matches to show that bigotry of any sort will not be tolerated in MLS.

What punishment would you mete out?