Does it matter what Tim Tebow thinks about gay issues?

Share All sharing options for: Does it matter what Tim Tebow thinks about gay issues? 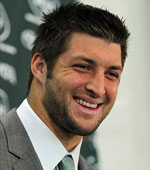 The New York Times has a terrific piece on Tim Tebow and religion, headlined "Tebow, a Careful Evangelical." The story by Mary Pilon and our friend John Branch discusses how careful Tebow is to sidestep almost any question on a controversial issue. He did a pro-life Super Bowl ad that generated a lot of controversy, but there is no record of any of his views on gay issues.

The Times' piece and a recent one in the New York Daily News by Michael O'Keefe (another friend of Outsports), referenced a Washington Post profile last year, where Sally Quinn tried to ask Tebow about gay marriage:

When asked questions he clearly has not been asked before, he ponders and tries to respond as openly and honestly as he can. Only once, when asked about same-sex marriage, did his publicist, on the other end of the phone, protectively jump in to object that that was off message.

“Tebow is part of a movement of ‘cosmopolitan Christians,’ ” said D. Michael Lindsay, the president of Gordon College and the author of “Faith in the Halls of Power,” a book about American evangelicals. “They’re more media savvy than their forebears and they understand the importance of building bridges. They speak more about what they’re for than what they’re against. It speaks for that segment of the evangelical community that wants to spend energy on things for the common good rather than be a lightning rod.”

I don't have a good reason why we should care about what Tebow thinks about gay issues, but I know we would care. There is no more polarizing athlete in America and no one who so captures media attention, as his Jets press conference -- for a backup quarterback! -- for the Jets demonstrated. Tebow-related items get good traffic on Outsports and the most reader comments; Cyd's "Why I hate Tim Tebow" and "Is Tim Tebow gay?" columns still get reaction months later.

Athletes are more and more being drawn into the debate on gays, be it NFL players taking stands on same-sex marriage or NHL players participating in a campaign to support a gay teammate. It's only natural that perhaps the biggest star in sports today, and one who so readily talks about religion, would have people curious about where he stands on a hot-button subject. Don't hold your breath waiting for an answer, though. Scrambling and being evasive have always been Tebow's strengths.