A gay golf fan tells why he loves the sport

Share All sharing options for: A gay golf fan tells why he loves the sport 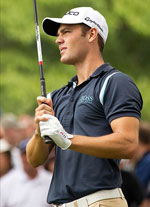 Martin Kaymer is one reason to watch golf

Outsports reader Kenneth Burns has a fun, breezy article in the Isthmus, a Madison, Wisc., weekly, on how he became hooked on golf. Part of it is the nature of the sport, part of it is the clothes and part of it is how the golfers look in those clothes. With the Masters coming up next weekend, don't expect Burns to be anywhere but in front of his set.

Of course, being a guy into guys, Burns has an added reason to stay glued to his set.

The guys are often cute, and they often wear flattering clothes. Yes, I watch PGA Tour golf for the same reason many people, I suspect, watch the Olympics, which I also adore. It's an opportunity to look at attractive, physically fit people. True, not all golfers are fit. I like that there's a place in professional sports for the hefty Zimbabwean Brendon de Jonge, who is magic with a driver.

It wasn't long after I came out as a gay man that I watched the rugged Swede Jesper Parnevik win the 2001 Honda Classic. I gazed in wonderment at his two-tone shoes, his neatly tailored plaid pants. Later I read that Parnevik collaborated on his outfits with the fashion designer Johan Lindeberg, and then I knew this really was the sport for me. Couture is involved.

The great thing about sports is that there is one to fit every taste.