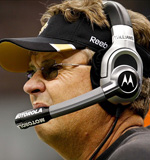 Former New Orleans Saints defensive coordinator Gregg Williams, the man at the center of the NFL's "bounty scandal," is also revealed to be someone who "used gay slurs with the best of them," according to a player quoted by Washington Post columnist Mike Wise. Williams had been defensive coordinator for the Washington Redskins from 2004-2007 when Wise covered the team. Wise wrote on Twitter in an exchange with fellow Post writer Dan Steinberg:

Gregg Williams = great coach. But you miss bad on "great human being" when you pay for body counts and use ugly gay slurs to motivate.

There were other anecdotes that Wise says were "worse" and that he could not use on Twitter. The exchange was first reported by the Washington City Paper. Lucas Grindley of the Advocate also has a detailed piece and we thank him for the tip.

Wise is very much in tune with gay issues, and is writing a profile for the Post of former NFL player Dave Kopay, whose coming out in 1975 made him the first NFL player to declare he was gay.

It's not only disturbing that Williams regularly used such slurs, but that Post editors covered up for him. I realize the media culture has changed regarding the reporting of gay slurs in the five years since Williams left the Redskins, but these incidents should have been fully aired at the time and the "taste" argument is garbage. Wise himself acknowledged that with a tweet today that "gay slurs are different than f-bombs." The first mention of Williams' gay slurs came in a Wise column on Saturday (after the bounty story broke) where he quoted one of the coach's former Redskin players as saying: "Gregg could drop gay slurs like the best of ’em. Some of things that came out of his mouth didn’t need to be said.”

The only way to stamp out homophobia is to air any offensive comments in public. The Post, in its bizarre and indefensible "taste" justification for removing what Wise had wrote, failed in its mission to fully inform the public about a man very much in the public eye.

Note: Wise wrote me on Twitter upset that I did not contact him first. He defended his editors, saying that regarding the slurs, that "one column was on deadline and too long." He also felt that people also misconstrued his back-and-forth with Steinberg. I appreciate his remarks and should have contacted him to get more context. He has been very gay-positive in his reporting over the years.