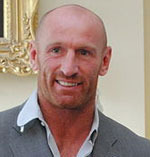 Former rugby star Gareth Thomas is nervous about performing later this year before schoolchildren in his native Wales dressed as the genie that comes out of the bottle in "Aladdin."

“Standing in front of 400 children and their parents in a genie outfit is a lot more nerve-wracking than running out against the [New Zealand] All Blacks at the Millennium Stadium," Thomas said.

“Ten years ago it is not something I would expect to do but it’s an opportunity to take a step outside my comfort zone.”

Thomas will be performing "Aladdin" in what is known as "panto," described as "a peculiarly British tradition of winter musical comedy theater." The show will be held in December.

Since coming out as gay two years ago while still playing, Thomas has seen his public profile soar. He was invited to last year's royal wedding, finished third in the British "Celebrity Big Brother" and is having a movie made about his life. "The film's going well," he said.

Thomas said that Micky Rourke still hopes to play him in the film, despite doubts about the actor's physical fitness. Thomas’ business partner Gareth Williams told Wales Online: “They [the film’s producers] have actually confirmed they want Tom Hardy involved, and maybe Jason Statham as well.”