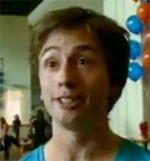 Sacha Heppell and Dixon Hernandez had dreams of becoming NFL cheerleaders, but they were dashed this year when they both failed to make it out of tryouts. Heppell tried out for the Denver Broncos and Hernandez for the Houston Texans.

"Who wouldn't want to be a Texans cheerleader?" Hernandez said during his tryout.

"When I dance, I lose myself," Heppell said. Both teams had an open call and anyone was allowed to try out. Both said they will take another shot next year. The Baltimore Ravens have 20 men on their cheer squad, doing the heavy lifting on female cheerleaders during routines.