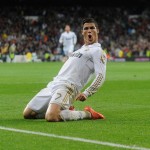 This week’s offerings include baseball and soccer celebrations, college football in the spring, the NBA, fencing, Olympic trials kayaking, swimming and Cristiano Ronaldo.

Photo 3: Jeff Spear in between bouts at the Division I National Fencing Championships in Virginia Beach (Photo by Peter Casey-US PRESSWIRE)

Photo 7: Craig Beattie of the Hearts celebrates after scoring a penalty during The William Hill Scottish Cup semifinal soccer match between Celtic and Hearts in Glasgow, Scotland. (Photo by Jeff J Mitchell-Getty Images)