Share All sharing options for: Mark Tewksbury excited about being Canada's Olympics face 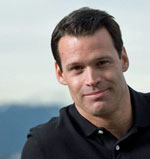 Former gold medal swimmer Mark Tewksbury has embraced his role as chef de mission for the Canadian Olympics team heading to London . Basically, he "will be front and center, the go-to man for athletes, the media and, ultimately, armchair fans across the nation." He's also openly gay, a factor that played no role in him getting the job, the Calgary Herald reports.

"Look, I'm not the gay chef. I'm just the chef. We don't want anything to distract the team. There'll be no rainbow shirts," he said.

Still, Tewksbury admits he is disappointed that, 14 years since he publicly announced he was gay, he remains the only top flight Canadian athlete who has taken such a step.

... "I came out in '98 and I thought then that in 10 years this would not be an issue, yet it still is. I really try not to be the go-to guy on this anymore because I don't really have anything more relevant to say. I have said it all."

Tewksbury, 41, said he hopes that Canada, which historically does better in Winter Olympics than Summer Olympics, will finish in the Top 12 in the medal count. "I think the London team will be really inspired by the success of the athletes at the [2010] Vancouver Olympics," he said.

Tewksbury's elevation to his job contrasts with what happened to the similar job in the U.S. Last year, former gymnastics champion Peter Vidmar stepped down as U.S. Olympics chief of mission after his vigorous opposition to same-sex marriage became known.